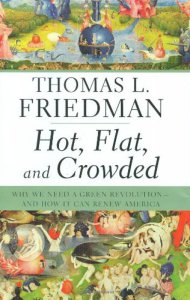 Hot, Flat, and Crowded: Why We Need a Green Revolution–and How It Can Renew America by Thomas Friedman

This book sat on my shelf for a while–partly because of its beefy stature, partly because I have wanted to take a break from being angry at the world. I’ll admit, life is much less stressful when I surround myself with books about creativity and other trivial subjects. However, after only consuming feel-good books for a while, I start to feel like a neglectful parent. There ARE problems in the world, huge problems. And my ignoring these problems doesn’t make them go away.

I know there is middle ground in there somewhere–between taking on the worlds problems and ignoring them–but where it is, I don’t know.

Every time I’d finish a book and scour my bookshelf for what to read next, I would pick up Hot, Flat and Crowded, and think, “no, I’m not ready to be a responsible parent again. I’m not ready to be mad,” and then I would put the book back on the shelf and find something else to read. Well, a couple months ago, I decided it was time again to get angry. So I picked up Hot, Flat and Crowded and read the son of a gun.

I was expecting a more angry Friedman–after all, how do you dedicate your entire career to climate change and not feel rage? What I found instead was a very thoughtful, calculated communicator. His tone was surprisingly positive. The green revolution he talks about isn’t a bloody one, it is one filled of hope and opportunity. *tears flow*

The title of the book introduces the 3 pillars of why a green revolution is needed. “Hot,” of course, refers to the rising temperature of the planet and its consequences. “Flat” refers to the rising standard of living amongst developing nations, best illustrated by the quote from Friedman, “we are going from a world of 1 billion Americans to a world of 2 or 3 billion Americans.” “Crowded” refers to population growth, especially in these developing nations with rising standards of living.

As I turned through the pages to review my highlights, I noticed a pattern. Nearly every passage I highlighted was some form of metaphor. With that, below are some of my favorite metaphors from the book.

On how falling for the climate change “hoax” is like training for the Olympics:

If climate change is a hoax, it is the most wonderful hoax ever perpetuated on the United States of America. Because transforming our economy to clean power and energy efficiency to mitigate global warming and the other challenges of the Energy-Climate Era is the equivalent of training for the Olympic triathlon: If you make it to the Olympics, you have a much better chance of winning, because you’ve developed every muscle. If you don’t make it to the Olympics, you’re still healthier, stronger, fitter, and more likely to live longer and win every other race in life.

On why peak-oil shouldn’t affect our development of clean energy (from Sheikh Ahmed Zaki Yamani of OPEC):

the Stone Age didn’t end because we ran out of stones.

Climate change books tend to favor one of two ideologies: 1.) We can maintain the American lifestyle, relying on policy and technology to combat climate change, or 2.) The fundamental problem–the American lifestyle–is the real problem that needs changing. I felt that this book took a relatively balanced approach, perhaps leaning more towards the former. The latter argument is, however sad it may be, a bit idealistic in my opinion.

If you want a primer on climate change, this book is probably not the best place to start. If you are already interested in climate change and sustainability, Hot, Flat and Crowded is certainly a classic and is worth picking up. Long-winded at times? Yes. A large collection of terms coined by the author? You bet. Still worth the read? Probably.

The Weekly Creative: A weekly, bite-sized podcast about creativity. Find the podcast on Apple Podcasts, Spotify, or at weeklycreative.com For my fiction writing, go to phantomfevers.com or search "Phantom Fevers Horror" on Youtube. View all posts by Derek Walker